Super Library Marketing: All kinds of marketing ideas for all kinds of libraries.

My Big Fat Failure and What I Learned From It 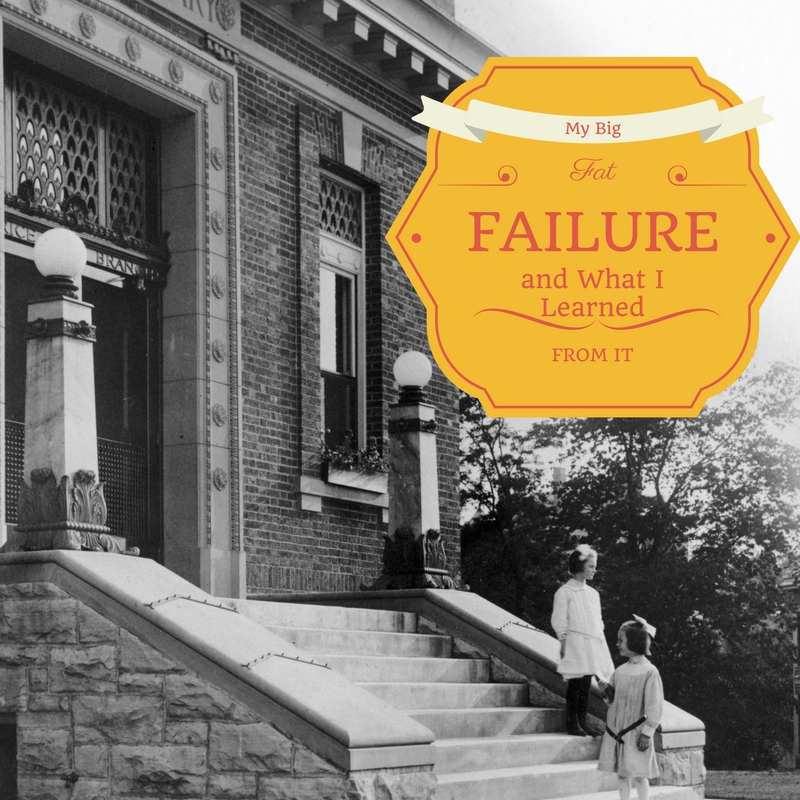 I have a library marketing routine. Every six months, I go through all the promotions we’ve done and take a hard look at what worked and what didn’t. I adjust my email sending schedule and my promotional plans for the next six months based on the data I’ve gleaned from cardholders who’ve interacted with our messages and promotions.

This time, within about ten minutes of starting this process, I was reminded of what could be considered our library’s biggest promotional failure to date. It was an experiment, so the sting is lessened by the knowledge that we intended for this campaign to be a learning experience.

Yea, Ang, keep telling yourself that.

We have one library in our system with a cardholder cluster distribution that is something of a miracle. This branch is a perfect representative of our entire system as a whole. It makes it an amazing test subject for any promotion.

So our idea was to convince occasional users of that branch–people who only come in every couple of months–to come back to the branch by offering them a free gift in exchange for checking out any item. It was January and snow was swirling and we had these amazing library-branded snow scrapers. Maybe that sounds lame to you but trust me, at outreach events, those babies are flying off the table. In any case, we actually did not identify the free gift in the promotion. Our overall library strategic goal this year was to increase physical visits to the branch, and this promotion fell in line with that strategy.

So we identified the target audience with the help of Orangeboy, Inc., the company that manages our email promotions. Through them, we were able to pinpoint occasional users. We took a two-prong approach. We sent those cardholders a postcard, asking them to come into the branch with the postcard for their free gift. We also sent them a targeted email a week after the postcard, which you can see below. 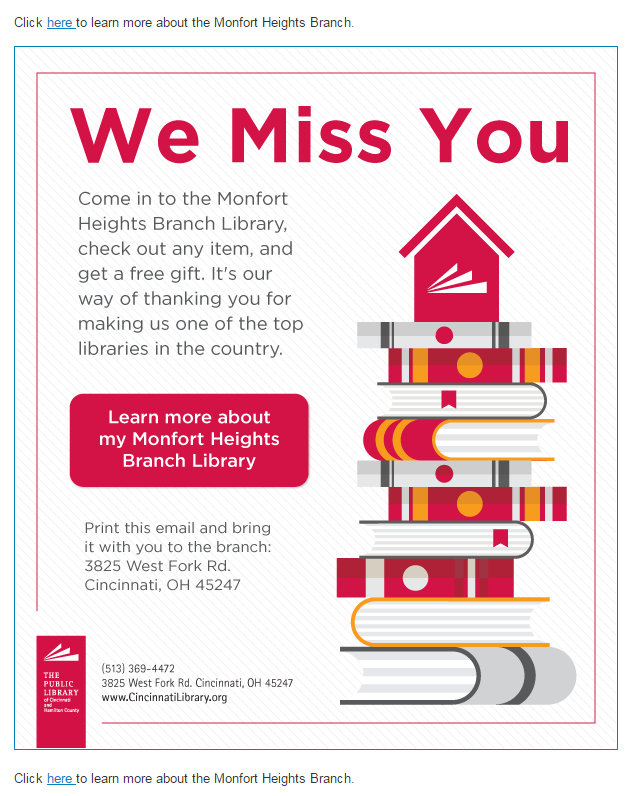 We sent the email during a time period identified as successful for library emails in our system–on a Wednesday night at 7 p.m. 735 people got the email and the postcard.

The email’s vanity metrics were pretty good…  51.29% open rate and 5.57% click thru rate. But the overall results–getting people to come in and use the branch–was not exciting. 6.6% of recipients came in to claim a prize. Eight were email recipients. 41 people brought in their postcard.

What did we learn from this? Well, a couple of things may have been at play. Perhaps occasionals don’t use the library often because they can’t get to it physically. Perhaps they just don’t want to enter the building. A digital campaign–driving occasional users to our eBranch in exchange for a gift–may be more effective, although we’d have to work out the logistics of getting a gift to someone who doesn’t want to come into a branch.  Perhaps it was the timing. The weather turned out to be pretty miserable, with record-breaking snowfall in the week after the postcard went out.  The week in which the email was sent was mild. However, if we tried it in the spring or summer, we may have better luck.

And although I generally look at this as a failed promotion, I can say that we convinced 49 people who haven’t used the library in a long time to do so!  Circulation at that branch increased by at least 49 items that month. It just seems like a lot of money and effort for a small result.

Still, we’ll keep experimenting with unique ways to draw our old customers back to our branch. Have you done something similar? Tell me about it in the comments. I’d love to hear how your library is working to increase physical visitors.

I have nearly seven years experience as a library marketer. My passion is helping libraries to promote their collection and services and create an emotional connection with their community. Find me on LinkedIn as Angela Hursh and Twitter and Instagram: @Webmastergirl.

This site uses Akismet to reduce spam. Learn how your comment data is processed.