TV News Coverage Ain’t What it Used to Be. What Now? 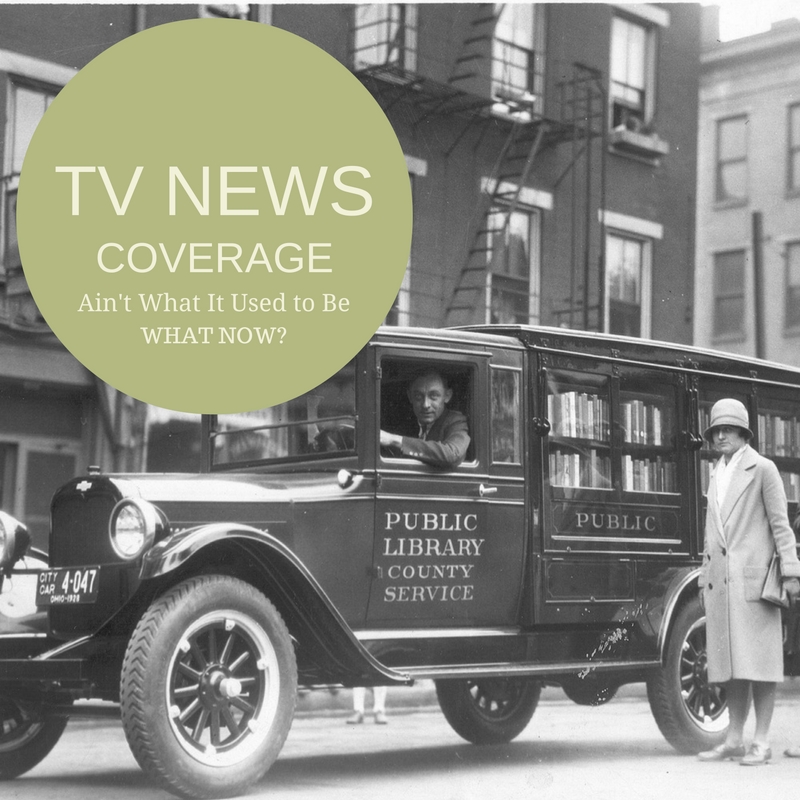 For a long time, I lived in a bubble.

I worked in a local television newsroom. I knew about EVERYTHING that was happening in my community, from which convenience store was most often targeted by robbers to where drug dealers were likely to be hanging out to the names and backgrounds of serial pedophiles to the intricate details of the city council fight on parking meter increases. And I could not imagine how people got along in life without knowing all the stuff I knew. I thought my audience hung on every word I wrote. I thought people were religiously watching TV news, just like I did… or at the very least, that they had the TV on while they were cooking dinner or doing homework, or cleaning the toilet. I mean, that’s what our bosses told us. They had ratings data and the data said we were popular.

Then I left TV news to work for the library. I started living like a real person. And I realized that most people don’t watch TV news anymore. They read newspapers and listen to radio news reports even less. Most people get nearly all their news from social media–Facebook in particular.

A study by the Reuters Institute for the Study of Journalism recently found TV viewing in the United Kingdom and the United States has declined three to four percent per year on average since 2012. If the trend continues, TV news viewing will see an overall decline of 25 to 30 percent over ten years.

When TV ratings go down, stations can’t charge as much for their advertising. Profits decrease and most stations will cut staff to cut costs.  That means fewer reporters and photographers to cover stories.

What does that mean for libraries? With a diminishing audience and a shrinking newsroom, getting your library’s story on the local TV news isn’t as easy or effective as it once was, as much as it pains me to say it.

So libraries often find they can’t get news coverage, especially on TV. What do we do?

Seeking a news audience to spread your library story is like building your house on rented land. You have no control over what is said in the story, how it’s promoted, and where it ends up after it airs. And you’re chasing the chance to be seen by a smaller and smaller audience. Why? Because it’s the thing we’ve always done?

Now, more than ever, is the time for libraries to embrace content marketing. There are easy and cheap ways to do this. Turn your blog into a content marketing machine, by regularly publishing stories that you once pitched to your local TV news station or newspaper. The same can be done with your print publication. Stop putting out a straight calendar of events and start adding stories about your customers, your librarians, and your service in a unique and exciting ways.

My library, unfortunately, does not have a blog as of this writing but we do have a quarterly publication and we fill as much of it as we can to publish the stories we would have once sent out as press releases to our media friends. The most beautiful part of this arrangement is that we get to control the narrative… the story is told by us in the most positive way. We don’t have to worry that our news friends will surprise us with a negative angle to their story. We don’t have to hope they’ll do a good job of promoting the story before it airs and place it in an easy-to-find location on their website. We control the story and distribution.

I’m not saying we shouldn’t pitch stories to the news. But we should no longer rely on news coverage to reach audiences who don’t know anything about us. Publishing your own story on your blog or in print gives you the chance to do distribution on social media, setting a target audience and reaching people who might not have a library card. EVERYONE is on social media these days–particularly Facebook–and creating a targeted boosted post on Facebook is easy and cheap.

And it may be more effective than ever.  A Pew Research Center study recently reported that four in ten adults get their news online. While TV remains the most popular place to find news content, its influence is slipping. The study found mobile news consumption has increased, with 72 percent of U.S. adults saying they get news on mobile devices, up from 54 percent in 2013.

So incorporate content marketing on your own website and use the easy, cheap social media distribution models to get your story in front of new eyes. It’s more effective, it costs less, and it cuts out the middle man, giving you control over the story and the chance to connect quickly with library fans, new audiences or people who haven’t used their library card in a long time.

I have more than eight years experience as a library marketer and nearly 20 additional years in communication. My passion is helping libraries to promote their collection and services and create an emotional connection with their community. Find me on LinkedIn as Angela Hursh and Twitter and Instagram: @Webmastergirl.

One thought on “TV News Coverage Ain’t What it Used to Be. What Now?”

This site uses Akismet to reduce spam. Learn how your comment data is processed.